With a hand raised... 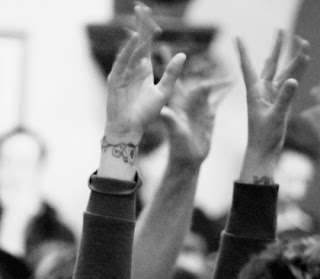 I had seen Ally coming my way for a couple of years. She was frequently the topic of conversation in the hallway and in the teacher break room. A troubled kid with a seemingly awful homelife. Disrespectful and defiant. Consequences didn't have much impact on changing her behavior choices. Ally once told her teacher to, "go ahead and take away recess, my mom will sue you."

She honed her foul mouthed vocabulary online and in person since getting her Facebook page at a much too young 4th grade. She didn't understand limits, because she didn't have any. She was frequently mean and used her meanness to get attention, any attention, that she almost pathologically craved. I talked to her a couple of times in her fourth grade classroom about the choices she was making online with some online interactions that were brought to my attention.

A couple of years before I had her as a student, I had coached her on our school's basketball team. She didn't have a clue to what she was doing and didn't contribute much to our run at the All-city finals, but she was trying. She'd get frustrated, I'd get frustrated, her team got frustrated at her, but I wouldn't let her feel or be on the receiving end of negative. She got too much of that elsewhere.

It wasn't until mid season that I learned how to talk to her. I was giving her pointers on some aspect of her play and I could see the tears start to form in her eyes and her body language was screaming, "let me outta here!" It was that moment that helped me a couple of years later when she was a student in my classroom.

That year, I had a "rough" group. A core of about 7-8 out of 30 that woke up each day and started their plans to disrupt the learning of their peers and get in the way of themselves during that day's lessons. Ally was one of the gang. Her quality of work was horrible. Rushed and minimal, her goal was to put something down on the page and call it done. Whenever she was called on , she would hide her head or shrug her shoulders and wait for me to move on. I tried waiting her out a couple of times, but we'd still be there if I'd stuck to my plan. She had formed her resolve through years of defiant practice.

Ally would get kicked out of specials, mix it up at recess, throw her books, and yell expletives at peers, subs, and other adults in the building. She engaged in behavior that got her suspended three times before Halloween. Never at me however and never in Room 216.

This was a girl in crisis though. I think that her life was chaos and I was certain that the part of her day when she was in Room 216 was the safest that she felt. Discovered by chance, I discovered an out of school incident early in the year that scared the hell out of me. The seriousness of the incident brought me to tears.

We tried to figure each other out over the first couple of months that year, but progress was slow.

Then one day, she raised her hand.

It was a turning point. I looked at her for a second and she looked back at me. We were the only ones in the room who knew what was happening. I called on her, she answered. She looked around to see if everything was okay. It was and she knew it. That raised hand was a big deal. For both of us.

We still had a ways to go and I'm not going to pretend that the rest of the year was dreamy, but we moved forward. She made progress and started to believe in herself a little bit. She learned that she could be in control, that she didn't always have to react or provoke.

She didn't need writeups for for having a hot chocolate on school grounds or chewing gum. She needed to trust someone. She didn't need behavior reports, she needed someone to believe in her.

I raised my hand.

Rejection and Jumping Off a Cliff 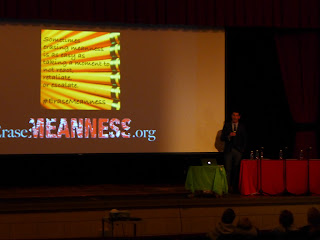 In the Spring of 2014, my understanding about relationships and tolerance were transformed. My son and I attended a screening of the unreleased feature-length documentary REJECT. The movie explains how our brains processes social rejection in much the same way that it processes physical pain. For someone who has been cast out or ostracized, there is a truth to the statement "it hurts". The film helps us to understand that belonging, understanding that we matter, and that we are loved by the ones significant to us is the number one influence on our lives as humans. Number one.

REJECT also helps us learn that acceptance is not just a social construct vital to our survival, but essential to our potential as individuals as well.

Since my initial viewing I have become an advocate of the film and helped spread the word about the various screenings around the country through my twitter and Facebook pages. I wanted other people to have a chance at changing their prism and how they looked at our kids, our relationships, and our world. Find out more about the film REJECT
When I got wind that REJECT Director Ruth Thomas-Ruh and her team had launched a kickstater campaign to help pay for the final costs associated with releasing their film, I was all in. I contributed a small amount that allowed me a digital license to show a web version of the film to a small audience during October's Bullying Prevention Month. Those modest plans got our wheels turning, so to speak. So we jumped off the cliff of not-ever-doing-something-like-this-before and started working towards bringing a community-wide screening of REJECT to the greater South Bend area.

Our goal was to extend the reach of the film, while spreading the word about Erase Meanness' mission.  We secured a venue, found and pid an insurer, energized our volunteers, and started reaching out to everyone we could think of to put people in the seats. We promoted through every avenue we cold think of, including good ol' fashion kiosk flyers and snail-mail and we were thrilled with the turnout. We assembled an expert panel for post-movie discussion and closed out the night with a terrific conversation on how a community can work together to create communities of kindness and inclusion.

I closed out the evening with a call to action.

We cannot isolate the bully or address bullying superficially by filling out a form or checking a box in an effort to demonstrate compliance. We must not wait for the toxic words of rejection and meanness to be digested and then treat the symptoms of their poisoning. Communities of kindness are formed by communities of parents, teachers, administrators, and community leaders that work to extend hands of cooperation instead of pointing fingers. We cannot wait and we must not stand-by. We shall start with kindness, always kindness."


We must make sure that every child gets a chance to shine like the sun. Erase. Replace. Be kind."

Eric Johnson
EraseMeanness.org
(some of this post was cross-posted at Erase Meanness' blog)
Posted by Eric Johnson at 4:32 PM 6 comments: