When Twitter recently launched their first Tweet tool, which hunts down and displays your first tweet for you, I had to check it out. 'YourKidsTeacher' tweet #1 was a good indicator of why I decided to use Twitter in my then 1st grade classroom. I’ve been on Twitter as @YourKidsTeacher for a little over 4yrs now and as my Tweet count approach five figures, I looked back at my timeline and saw how the nature of what I share has changed.

Twitter as Communication Tool
Initially, I was looking for an easy communication conduit with my home partners and Twitter fit my need well. The site was easy to use, easily updated, and it was accessible across a number of platforms. Even for my home partners who didn't have a computer at home, almost all of them had cell phones with which Tweets could be received via text messages. (smartphones were still fairly new)

Back then, I shared what we were doing at a couple of points in our day, classroom/school information, reminders, etc. Twitter was a great place to share the good things going on. I shared the learning joy of first graders.

It wasn’t until much later, when I started participating in #chats and had ‘conversations’ with other educators from all over the world, that my tweets evolved from their original mission. My current usage is not exclusively about the things going on in our classroom. I ‘talk’ to a lot of different people now, moderate a chats from time to time for areas in which I have something to offer. There is a lot more of ‘me’ in my timeline. The evolution required a change in my profile descriptors and an statement of an unapologetic fashion faux-pas. Nobody needs to see my toes.

The school year resembles the path of a roller coaster. I share the good on Twitter. My kids, school, and grade level achieve some great things. Their efforts and accomplishments deserved to be shared. I’m proud for their efforts. I share the ups, the peaks, the high points. I share the things that get me excited. I tweet when a kid does a great thing, when our school makes the news for a feel good story, or when I leave school feeling awesome.

Like on the day when one of my kid's favorite authors tweeted back that he loved what one of them had created. 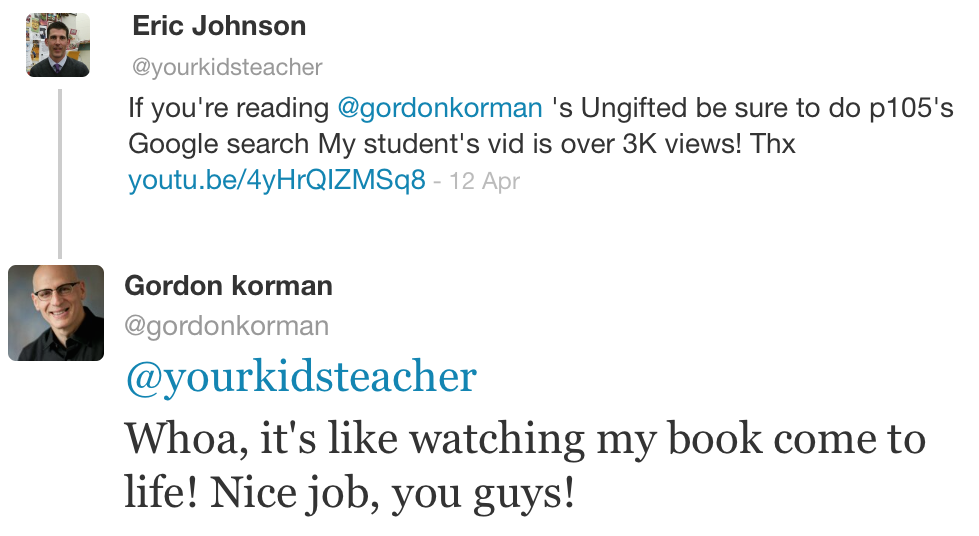 I’m not as good as the Twitter me.
However, you won’t see me tweet about bad days, bad lessons, or bad experiences. I think there are enough people writing stories about real and perceived failures in schools. I’m not about to contribute 140 characters to that narrative.

My Twitter miranda: I won’t provide any evidence that can be used against me and my peers.

People fail at their jobs everyday. Me too. I fall down all the time. Sometimes my organizational skills fall apart and I can’t keep up with all my clubs, teams, home partner communications, committees, and other clerical tasks. The non teaching stuff of being a teacher can be overwhelming. Frustrating. Sometimes I don't give a lesson on indirect objects the full weight and force of my teaching skills. There are times that my lessons go down in flames the minute I lift them off my table. Days that I feel like crying or screaming. There are numerous days that I feel Quixotic. Ineffective. I just won't tweet those things out.

I blog about those failures sometimes. I think I have a responsibility as an educator to talk about my missteps. Writing about those times helps me reflect. When I read my favorite writers, I realize I’m not the only one who might have had a bad day. Sometimes re-realizing that there are other educators out there who crashed, burned or failed yet again to tip over the windmill helps other teachers. Many of us struggle reaching our own expectations. I like to read about those instances, but I like stories that are longer than 140 characters.

If you want to think further about sharing the failures and such in your classroom, read this great post by Michelle Baldwin and then scroll down to see the comments by Dean Shareski and their conversation. A couple of my favorite virtual colleagues. I value their insights and conversations a great deal.

'Yourkids' Antisocial? No, Just Towards You.

They're so...
Why are Millenials and the teens that make up the generation behind them so 'anti-social'? Millenials, the generation born between 1980 and 1995 ( about 80 million strong) have been maligned,  exalted, and held suspect as we try to figure out what they'll will become once in power. 60 minutes' Morley Safer described them as the "the generation that only takes yes for an answer." They're apparently responsible for the downfall of social events. They're detached, disaffiliated, and always on their phone. Well, 'on their phone' might be the wrong description, staring at their phone and typing might be more appropriate. No one uses their phone to call anymore.

They also remind me a lot about my generation (Generation X). We were told that we could only offer up grunge and slack when were coming of age. We heard many of the same messages, we were spoiled, not motivated, and anti-social. The world was in poor hands.

The Kids' Are Alright
Kids still interact, still form groups and hang out with friends. They still seek acceptance and a sense of belonging, It's just that their method has changed. Social media is by definition a way to share and socialize. Their just not necessarily 'social' with the people in the room.


They are not 'anti-social', they're just anti-social-media with you.

Facebook is still the thing, but the profile that grandma sees is not necessarily the only one 'Yourkids' maintain. I'm okay with that. I worry about it, but I'm okay with it. Kids need to have their own world, their own way. That's how they become who they are.

Digital Citizenship and Digital Footprint
The growth and prevalence of social media make my job as a father and teacher all that more important. Once grandma got on Facebook, it was dead to many teens.  They've sought out places where adults aren't. Kids always have. Always will.

If adults try keep up, stay on top, or even ban these methods of socializing, they will be unhappy with the results. There will always be something new, newer, or the newest that you don't know about.

Content on internet can be unsavory and being safe is important. Taking steps to protect your private information, necessary. I think it's better to teach kids the responsibilities that come along with all that access and sharing.  Nothing is private. Bad Tweets have consequences. We need to focus less on controlling  or banning and focus more on rules for behavior that make sense.

My "Grandma Rule" - If you wouldn't share it, say it or show it to your Grandma, don't post it, snap it, or type it"