THE Wedding Through the Eyes of a 6 Year Old 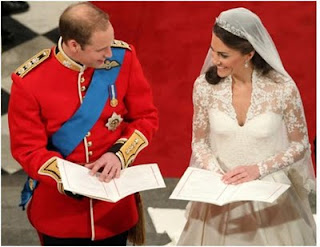 photo by Andrew Milligan/AFP/Getty Images
I like to give my kids exposure to things that they might not see on their own. People they'll remember, events that they'll probably never attend, places that they'll likely never see. Our laptops have made the world smaller, our world view larger, and our understanding of others deeper. My classes have attended rocket launches, festivals of color, tomatoes, elephants, and visited some of the worlds great museums and zoos just to name a few.

I wasn't sure how my first graders would react to today's Royal Wedding though. Appreciating the concept of a wedding is a bit far off for the age group. Sure, some of them might have been ring bearers or flower girls, but I really couldn't picture them being too interested for very long. Once again I was reminded that I should never under estimate a six year old.

I set aside the normal morning routines this morning and just put a simple message on the morning welcome board, "Have a seat, enjoy the Royal Wedding!" I remembered Charles and Diana's wedding and I thought this might be something these kids might remember as well. We watched some of the wedding live (when they walked out onto the balcony) and some of events ( their service, vows and processional) on replay later on in the day.

Predictably the girls identified with the princess and a few of them relayed the fact that they were up with their moms watching the Prince and Princess in the dark hours of early morning. A number of the boys, including me, were taken with the horses and the pageantry. All of us were impressed with the 'bigness' of the whole affair. During one of the overhead shots of the processional, Justin shouted out with his singular vocal frequency that cuts through even the loudest of crowds, "Are those ants?" I replied, "No Justin, those are people", which resulted in a chorus of "ooohs", and we were off. The comments were coming so fast that I grabbed a stack of post-it notes and tried to keep up and focus through the tears of laughter.

Here's a glimpse at The Royal Wedding through the prism of a first grader."Mr Johnson, start at the beginning where she graduates"

At the church
During the Processional
On the balcony
A great day, a terrific experience. The wedding wasn't too bad either.
Tweet

Get Follow Me Buttons
Posted by Eric Johnson at 10:25 PM