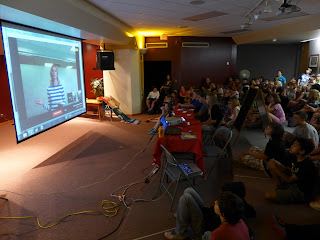 The idea was floated over an overstuffed burrito that I knew I couldn't finish, but had committed to its completion because I didn't have anywhere to put the leftovers. I had only met one of my lunch companions a few hours earlier at breakfast. Noah Geisel and I were both attending the 5-Sigma Educon near Denver, CO, but had never met.  (Next year's conference is scheduled for February 19-21, 2016).

Earlier that day, I had grabbed a Chick-fil-A biscuit sausage sandwich, coffee, and a glass of OJ to begin my conference morning. I quickly realized that breakfast sandwich consumption is made slightly unlikely with one hand. A lone occupant at a nearby table offered a chance to eat a little less awkwardly. Noah and I talked about why we were there, a little about his cool sweater, and exchanged Twitter handles while we ate and prepared for a second cup of coffee. We took a picture in front of the conference's backdrop, even after I called him the wrong name, and then were off to the day's first sessions.

Over lunch Noah and I talked about providing experiences for students that they normally don't get. Experiences that help them understand the world at large and open their life's prism a little wider. Noah started talking about the workspaces at Sphero, a robotics company, that focuses on "connected play" and helps kids understand programming through their products. He knew a couple of guys that worked there and visited their offices. He raved about the location, company's vision, and growth.

Noah described the workspaces and how personalized and diverse they were. A modern workspace that relied on collaboration and creativity was something that I thought my kids would enjoy and learn from. I knew if Sphero was willing, #Room216 would love to spend some time with them.

Up Periscope
Skype was the initial platform for the "visit", but then the Mayweather v Paquiao fight happened in early May. The fight between the two boxers had been on boxing fans wish list for a long time and when it was finally scheduled the pay-per-view prices were right around $100. A little too pricey for many. Millions of people paid, but many watched the fight for free via Periscope, a free live streaming app that allows users to live stream any event in front of their phone.

A number of the people that were watching the fight through pay-per-view also setup a free live-feed broadcast, albeit illegally, from their living rooms. Anyone in the world with the Periscope app could watch. That's when most people heard of the app, including the media, and many of the stories focused on the business losses and how the technology disrupted the pay-per-view business model.

Noah suggested we take this disruptive technology and "flip it" into something positive. We started expanding our game plan to utilize Periscope and turn the static Skype call into something more dynamic and interactive. A virtual field trip.

We came up with a combination of Google Hangout on Air (GHO) and Periscope. Noah would be our Periscope feed and we would be the remote, directing him where to go and what to look at. Dani and Lauren would take us on a virtual tour of Sphero's Corporate offices (Boulder, CO) using their iPads.

Room #216 friend, Rosie Woods of ABC-57 covered the event as part of her station's "Cool Schools" series. Rosie's genuine excitement for the "trip" resulting in a great story and a great memory for my kids.

We started in the lobby, met the digital receptionist, and saw the differences between Sphero's two main products the Ollie and Sphero. Dani and Lauren showed us the Sphero museum, a collection of past product iterations, failures and successes, which included the phone with which President Obama used to work one of the Sphero balls. A highlight for the kids.

We got a great chance to see the design and collaborative spaces of the company's associates where all of the different roles function. We got a chance to talk to coders, video creators, and product testers among others. Dani and Lauren were awesome!

Is that a Nerf Gun?
In Mishawaka (Indiana), we had setup dual screens so that we could watch both the Google Hangout broadcast and the Periscope feed. Three of my 6th graders were piloting the tour from a table in the center of our room, which included all of school's 5th and 6th grades. The three students took turns commenting and asking questions in the chat portion of the GHO, live-tweeting, and sending feedback in Periscope. The trio also had opportunities to ask questions when they were in the 'hotseat' (on camera). 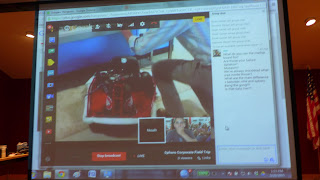 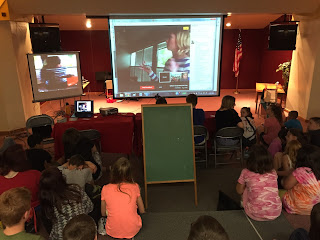 Along with Teched-out, 3-screened multiple computer work spaces, the kids spotted a razor scooter, various toys, stuffed animals, and a nerf-gun. "You can have a nerf gun at work?" They were beginning to understand that today's work places are often much more comfortable and fun than what they may be used to seeing or expect.

The Sphero folks were just tremendous. Every employee we talked to were absolutely generous with their time and commitment to the effort. We concluded the trip by joining their Friday "all company" meeting and said hello to company executives and others that we had not met yet and had a chance one more time to say thank you. It was a highlight of the school year for many of my students.

Towards the end of the field trip, one of my girls asked if there were any "girl engineers" that worked at Spehro? Indiscernible to anyone in Boulder or Mishawaka, that question, from that student was the highlight of the call for me. This is the girl that started the school year making excuses for not understanding things or maybe not giving her best effort with references to her blond hair and "I'm a girl ya know." Now, this girl had taken the lead for this project, threw herself into understanding the basics of coding and took on a big project as a result. She transformed herself during the school year into a serious student who believed in herself and wanted to work towards being an engineer someday. The experience with Sphero and their products solidified that foundation.

THAT's why we do these things. To give a kid a glimpse of what's possible.

Feel free to watch some of our experience at Sphero Corporate Virtual Field Trip.
Next Time
At the time, we weren't aware of anyone attempting something like this on this scale using the technologies and anytime you pioneer something like this there is bound to be a large bit of learning that happens.  The start was little clumsy, but once we got going it smoothed out considerably. During our debriefing call the following week, Noah and I identified a couple of things that we'd like to improve on and we'll pass on our learnings if you would like to try something like this in your classroom.

If you have any questions on how to set up your own Periscope field trip, let me know. I'd be happy to help. You can find me on Twitter @YourKidsTeacher