An Empty Desk, an Unexpected Change 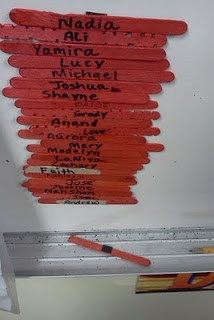 I'm a teacher, but I'm not the only one that gets an education in Room 116. I recently learned that the culture of a classroom can change in unexpected ways, when a student suddenly leaves.

I've had students come and go, and student changes are part of the gig. I don't want that to sound dismissive of a student's absence, but when our class walks in the next day, we have to get back to learning. Before the student leaves, I try to make an opportunity for everyone to tell them how much they meant to our class. We have a community circle and ask each student to say something meaningful about the departing student. I'm always touched with how expressive and caring a young child can be towards another. So many of my first graders have a natural kindness, that when given a chance to express a farewell thought, their words can be really very moving. While sometimes we get to share our thoughts over cupcakes, the time-frame of a departing student does not always allow for casual reflection. Sometimes the period of time to say goodbye can be quite short, even brutal.

I walked into class on a Wednesday and executed the normal pre-dawn routine of getting our room ready to facilitate learning for my six and seven year olds. I reset the attendance/question of the day sticks, set out the morning work, changed the morning greeting/date and looked once again at the recently vacant fish tank. I was still uncommitted as to what to do with the 10 gallon classroom attraction after my attempt to dress it up made for an unfortunate and unexpected end to all of our class fish. Something on the decorative shells I recently added, tainted the water to the extent that all of the fish, including the newly added plecostomus, died sometime during our third and fourth snow day of the season. It was an unfortunate end for my son's  $.50 prizes from a school fair three years ago.

When the loss of aquatic life was discovered sometime between fact practice and problem solving during a math class the week prior, the most vocal critic was predictably Celia. With her hands on her hips and her perfectly raspy little girl voice cutting through the mummer of numbers she confronted my mistake with "Why did you do that Mr. Johnson?" That pointed, unfiltered remark was what I had come to expect for Celia (not even close to being her real name). Celia wasn't in my class the first few days of school, but I had already been introduced to her personality through anecdotal accounts by some building teachers before the start of the school year.

Several of my peers, either out of curiosity or schadenfreude, checked on me after the first couple of days of class. "How was Celia?" "Was Celia here today?". Apparently, she had quite the reputation, but I wasn't that interested. I'd have the next ten months to get to know Celia and figure her out on my own. For the first days, Wednesday and Thursday, of our first week of school I couldn't figure out what everyone had been talking about. Celia was attentive, respectful, quiet, and from what I could see 'whip smart'. Then came Friday.

We began our literacy block after rehearsing/modeling our morning procedures to get our new school year off to a smoother start. The sound of a pounded desk and loud clacking of braided hair erupted from behind me while I was covering the /d/ sound at the whiteboard. When I turned around, I saw Celia having her own little rock concert. I'll never know the song she was rocking out to, but based on her intense motion, volume, and intensity, it resembled a Rolling Stone article's description of attendee behavior at a Deep Purple concert in the 70's. I never thought I would utter the sentence "Please keep your hair quiet", but from my mouth, out it came. This type of behavior would continue at various times, with various triggers over the next several months. Sometimes Celia would thrash so hard that barrettes and beads would fly off of and out of her hair, not dissimilar to the Witch Hazel character in the Bugs Bunny cartoon "Broom Stick Bunny". I began to understand what the other teachers were trying to warn me about. As disruptive as the behavior was to the class instruction, she lovingly, instantly, earned her nickname for the year, Rockstar.

I would get to know Celia pretty well over the next several months. She would frequently come into our day late, if at all. Her tardy slips inflated her file that is held in my desk drawer. When she did arrive, she was often exhausted, hungry, and more than a little ornery. I learned that a nap behind our kidney table curled up with an oversized stuffed bear would get her on track for at least part of our learning day. More than once I walked down with her to get some breakfast, if still available, from the closed lunchroom. More often though, a granola bar and juice that I have stashed away, had to suffice for her breakfast. I learned that she sometimes bounced around and stayed the night in three separate homes during the course of a week. She complained that her brother's loud music kept her from falling asleep sometimes, along with the parties and the yelling. Celia was the only one who raised her hand one day when I asked for another word for cop. The hand raising was mostly a formality, because she was already spelling P-O-L-I-C-E out loudly before I could even call on her. It was clear that her life experience had already familiarized her with our local law enforcement.

I worked with her on understanding her personality and how she was a leader in Room 116. She was someone who people wanted to be around.I think that she began to use her powers of attraction for good and not using them to boss people around like she was doing in the beginning of the year. Bossiness was still her default, but she was trying. She was developing her reading and writing skills rapidly. Her leveled reading assessment and benchmark testing in the the beginning of the year showed where she needed some skill building and she was responding wonderfully. Math facts frustrated her a little bit, but once she made the connection of why there were important, she was on board and was progressing on pace. She grew to understand me and I, at times, thought I had her figured out. Until dismissal that Wednesday, when her sister came up to me and said that today was Celia and hers last day. I had a similar conversation earlier in the year, that the girls were going to move permanently to a new place, but nothing came of it. I asked Celia what she knew about the move and she just shrugged her shoulders. Not quite sure. Then their names was called over the PA, indicating that their ride was here, and she ran out the gym door.I went home and told my wife that Celia might be moving and that I hoped it wasn't true. Her knowing question of "Wasn't she a pain in your butt?" was true, but she was my pain in the butt.

Thursday morning came and with it the same morning prep routine. However, there was a air of doubt and anticipation hanging in the air. Morning assembly came, and with it several turns over my right shoulder to see if Celia was arriving late, dragging her back pack across the gym floor. We started the days learning, but I always had my ear open for her arrival and the telltale hollow sound of her shoe heals hitting the floor as she walked with shoes larger than her feet. Nothing. Around midday it was confirmed that the girls would not be returning and that their withdrawal paperwork had been started. I finished the day and went home.

Friday the room had a noticeable gap, vacancy, space, I don't know the word, but something was missing. Sometime between phonic blends and writing the phone rang with the front desk informing me that Celia's 'granny' was here to pick up any of her things. I went straightaway to the bookcase and frantically tried to find her favorite book from our library. It was a pink and silver sparkly book about some kind of princess and her love of ice skating. A tiny little book that was beyond her reading level, but one nonetheless that she curled up with time and time again during free reading time. I had helped her read some of the pages, but more often than not, just helped her with the hard words. I grabbed a sharpie, wrote my name on the inside cover. From: Mr Johnson, To: Celia with Rockstar written underneath. Handed her Grandma the plastic shopping bag with Celia's desk contents and showed her where I had signed the book and told her to tell Celia that we would miss her. Then, I tried really hard not to cry in front of the remaining kids in Room116. That came later when I told my wife wife that Celia was gone. Told her about her favorite book that I gave to her grandma, then lost it again.

The emotion came out one more time when I came in Friday for the usual morning setup and went to reset the attendance sticks when I saw Celia's laying in the tray. That was all it took to set me off again. Fortunately, I'm usually the first one into the building, so I didn't have to explain to anyone why my eyes were watery and red. The 'lunch lady' has her own routine in the morning and was easily avoidable. The day kinda flew bye and then I went home.

Monday was better. Tuesday a little more so. The classroom culture had changed, mellowed a little. Not as many disruptions, but not nearly as interesting. At some point in the week I stopped trying to figure out when that little girl reached in and stole a little piece of my heart. It probably happened sometime in between "Perfect Strangers" and "Smoke on the Water"in a Deep Purple like time-line, but it doesn't really matter. My little Rockstar can have that piece of me. She needs it more than I do.Thanks for letting me be in your band. Goodbye
Tweet

Get Follow Me Buttons
Posted by Eric Johnson at 2:47 PM