No Longer Afraid to Fail

I was inspired last year as I watched a teacher that I follow on Twitter take on something big and pull it off.  Nicholas Provenzano, aka 'The Nerdy Teacher' (follow him on Twitter @TheNerdyTeacher), took on something big last year, and if you read his blog posts, the project had a bigger impact on him than his students. You can read about the project, which begins here: The Epic Romeo and Juliet Project

I like big ideas, and admire people who think that way, and I am inspired by their ambition as they throw their heart into something. (see @ktenkely who founded a school this year) Unfortunately for me, the ability to try something just for the sake of trying something is no longer one of my strengths. I enjoyed thinking that way in the early part of my first career. Big, bold, and innovative thinking was recognized and rewarded, as long as it got results. Over time though, let's just say it got beat out of me. Checklists, conformity, and superior's "better" ideas were among the many factors that made me understand that my creativity and risk taking were no longer valued. So I towed the lined, filled in the check-sheets, and emailed reports on worthless soul sapping activities.

Then I became a teacher and I got my creativity back. It didn't happen quite that fast, but teaching has reawakened the creative forces and drive that had been stamped down. When I realized that I wasn't going to lose my job or ruin a kid if an idea, lesson, or project failed, I was off. Freed.

I realized after getting settled in at my new school this year, that we didn't have a science fair. In November I started putting out feelers to gauge interest and to get an idea of the reason why the largest Elementary School in our district didn't have such a memorable childhood event.

I took a flier and proposed the idea to our principal, rolled out the idea to our supportive staff, held a parent informational night, then signed up the kids. Then, began an 8 week journey that all at once was stressful, draining, uplifting, and inspiring. During our school-wide recognition assembly, I thanked my wife for letting me turn her into a "Science Fair Widow". Throughout the project, the journey was shared with a blog, Twitter, website, and Facebook , and this past week I had the pleasure of presenting the kids and their learning with our district's School Board. 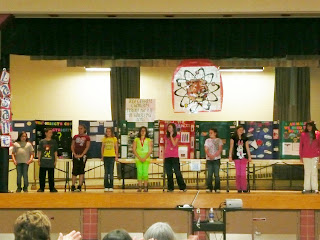 After a brief introduction on the purpose and focus of the fair, I transitioned to the gym's stage. While The Alan Parsons Project's 'Sirius' played to a rising curtain that revealed our school's young scientists, their smiles were all that I needed to validate the hard work. I interviewed students who took a risk and weren't afraid to fail. We shared more than moment, we shared the challenge of taking on something difficult, and pulling it off.