I am usually not welcomed on the weekly grocery store trip with my wife. It's not that my superior packing skills aren't valued when I deftly make every inch of our reusable bags count, it's because I slow things down and complicate the process. In teaching vernacular, my omission has more to do with me not staying on task. A 'normal' trip is extremely efficient, rooted in her rote knowledge of the aisle layout and the repetition that years of shopping the same store have brought. Lists are made, coupons are prepared, and goods are gathered. Get in, get out, no one gets hurt.

I find the variety of goods, both complimentary and substitute, very intriguing. It is mildly amazing to me that the supermarket carries all these diverse types, sizes, and flavors to satisfy the differing tastes of my neighbors. I often wonder as I traverse the aisles, do they really sell all of this stuff? The breadth of choices in mustard alone are staggering. Some of this stuff is pretty irresistible, which has lead to my exclusion.

When I come along, items that were not on the well thought-out list mysteriously end up in the cart and are gradually revealed as the 'authorized' items are placed on the conveyor belt. The items that I have selected could be classified into the impulsive, curious, or sub-conscious decision silos. Inevitably, I get 'the look' and then a quiet acceptance of my weakness that concludes the checkout process.

A recent trip yielded an unusual result from an impulse buy that was not mine. My wife and I were making a detour from the straight line grocery route through the general goods section. Palletized goods are now placed in every retailer's aisles creating a way for them to display seasonal goods and special buys. When we rounded the corner from the main entry, my wife spied an impulse buy that could not be resisted. Brightly colored pool noodles were soon plucked from their cardboard presentation boxes, even-though we don't have a pool. They became minor thank-you presents to our friends who graciously let my son swim at their house. The noodles are 7ft long hollow foam tubes that can be used to keep a person afloat, create big splashes, or whack a fellow poolmate. I soon realized that these noodles were unwieldy and awkward to carry through a crowded store.

I variously tried different ways of getting them to their final destination without knocking anything over or inconveniencing anyone. First, I tried carrying them at different angles, but rounding corners was a challenge. The leading end would get there before I would. Carrying one each arm was not well received by my fellow shoppers either, as I took up more than my fair share of the aisle. I sought the utility of the cart, but that was not a very good option either. Their length was not accommodated by the cart's relative short basket. Placed backward, a turn required releasing your hands from the cart. Placed forward, the excess length acted like a lance for a jousting knight.

I resigned myself to the fact that there was no good way to transport the lengthy items through the store, so I just managed the best I could, until I rounded the papergoods aisle. There was a 10 year old'ish boy that had found a creative solution to our shared problem. Shopping with his mother, they too had chosen two pool noodles, but his solution to the frustrating problem I encountered was remarkably different.
He had simply placed the length of the noodle vertically through the gaps in the child basket and routed the end to rest on the floor of the beverage tray at the bottom of the cart. Ingenious! I didn't think of that. 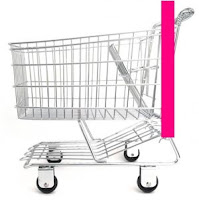 His solution solved the jousting , cornering and steering problems with one simple solution. It occurred to me that creativity was at work. His solution was both original and useful, the definition of creativity. I'm sure that his mother didn't tell him how to place the noodles, or place limits on his thinking. The boy just realized that he couldn't drive the cart, a highly valued activity when I was young and apparently for his as well, and carry the items at the same time. I was impressed.
Creativity is sometimes elusive and hard to capture, but I believe can be taught and integrated into traditional activities. Teachers must be willing to let go of the control that can place limits on child's learning. Let the child take control of their own learning with simple outlines of a problem. We should also regularly structure cooperative and collaborative groups that use the diverse thinking of individuals. We can unleash student creativity to create something original and useful, if we just trust ourselves enough to let them.

Get Follow Me Buttons
Posted by Eric Johnson at 10:42 AM