I recently had the opportunity to spend the day with a few middle school aged kids on a day trip to Chicago. The plan was to visit the Chicago Printers Row Litfest and, if I could persuade the Bieberized girls, to stop by the Chicago Blues Fest. I've always maintained that Chicago is the best Summer city in America, influenced by my midwest familiarity with the variety of the, mostly free, events that are part of the warm weather celebration that take place in the beautiful city of big shoulders.

I was going either way. For the first time in a very long time, I didn't have any commitments that would hold my attendance back. Work could no longer demand my presence, as I was trying to secure my first teaching job in a gloomy atmosphere of dramatic state budget cuts and corollary teacher layoff notices. My son, who would be coming along this year, wasn't playing summer baseball for the first time since t-ball. The yard was mowed, the house was clean. I was going.

I first attended the blues fest in the summer after my 16th birthday. The first weekend of June, its traditional place on the calendar, fell just a couple of months after getting my drivers license and it became my first big roadtrip. It was to become an annual tradition for a number of years, variously with a singular friend or acquaintance that could share gas money and tolls. Over the years I was fortunate enough to see some great blues giants, Robert Cray, B.B. King, Ruth Brown, Koko Taylor, and on what seemed like a frigid night in Grant Park, John Lee Hooker, to name a few. This time, the highlight was to be 95 year old David 'Honeyboy' Edwards who is probably the last genuine practitioner of Mississippi Delta styled blues. The chance to see a living legend was slotted in very nicely to an mid afternoon spot.

The Printer's Row Litfest (formerly called PR book fair) features hundreds of booksellers, both large and small and sometimes quite specific, and dozens of author events. Particularly interesting was a talk scheduled early in that day by Sebastian Junger, author of a Perfect Storm and his newest WAR, about U.S. soldiers in Afghanistan's Korengal valley.

I thought the challenge would be to get these kids to turn down another day with laptops, video games, full-on texting, and TV for a day away from the virtual world. One with real experiences and actual interactions with something not plugged in or powered by a battery. The barrier proved to be one of my own making. I had mistakenly placed a limitation on these kids. Once again, children taught me more than what I taught them.

Initially, the atmosphere in the car was raucous. I had brought along highway bingo boards and there was much debate on what constituted a "tree grove' and other elements that would form a line of victory or omit a square of 'fail' (apparently the word of the day). The 'old fashioned' game was a hit and I was happy that they were not texting their marked off squares to each other. Next up was car Madlibs another activity that did not require laptops, nor iTouch. The interactions were real, the fun immense.

I was taken aback by the kids enthusiasm upon arrival to the Litfest, they were genuinely engaged in all of the offerings that surrounded them. Most interestingly was their interactions with the authors that were present, some actively pushing their books. Having a conversation with the person while handing you their work was an unexpected thrill for the kids and a memorable one for me. The authors talked with enthusiasm of how their work might fit into the young readers interest. Especially engaging and earnest was Nick Valentino author of Thomas Riley. Dressing the part, Mr. Valentino willingly took time to talk to my boy and pose for pictures, sign and stamp his book with passport stops that presumably involved his title character. It was unique and genuine. Only once did I feel that I had to intervene with these author interactions, when another science fiction author was pitching just a tad too hard to his non-target audience, with which the kids did not have the tools to politely turn down the hard sell. 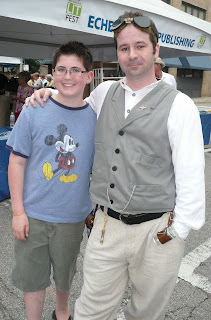 Appropriately enough to our next destination, weather was blowing in and it was time to take shelter as  Sebastian Junger, the author of "the Perfect Storm" was holding a talk at the recently revived Jazz Showcase, a fabulous room, with a vibe that the kids might not experience on their own for a few years.  Mr. Junger held a wonderful talk about his experiences over a 15th month period with U.S. soldiers in Afghanistan's Korengal valley. He carefully focused his non-political talk about the brotherhood and brave actions of the soldiers with whom he shared a makeshift outpost that was home to some of the worst fighting of the war. (MSNBC reported last week that the actions of the first living soldier to be nominated for the country's highest military honor, the Congressional Medal of Honor, fought in the Korengal valley). I was proud of how polite the kids acted, listening intently and courteously, to a topic that might not have been top of mind in their sometimes singular world. They chose to turn off their cell phones, took flash-less photos and listened quietly, which is more than I could say for some of the attending adults. We waited around for our copies to be signed and talked briefly with Mr. Junger as he graciously posed for a snapshot. 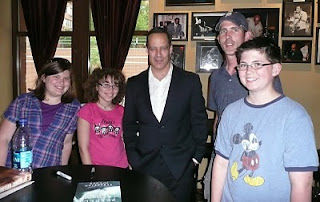 We meandered around the remaining tents and tables of books. The kids reaction to every new find was wonderfully ebullient. They gleefully engaged poets, short story authors, and activists in what was seemed like an endless array of topics and genres. I rarely saw a cell phone or overheard an expressed opinion of boredom. The kids were too busy experiencing all that was offered.

We ironically got some New York style pizza, no time for the local deep-dish variety, and headed to see some live music. Real instruments, real musicians, and no Autotune. Stops included the newly remodeled Buckingham Fountain, Blackhawk Jerseyed lions at the Art Institute and pleas to visit the Sears Tower (I haven't warmed up to the new name) brought us to the huge Saturday afternoon crowd in Grant Park. Blues delivered by a 95 year old man proved to be a hard sell to 12 and 13 year old's, but the trip brought real interactions and life memories that will surely last longer than their high score in Mario Kart.

Get Follow Me Buttons
Posted by Eric Johnson at 8:17 PM